To help my son with his addition and subtraction facts we have been playing Sunya - The Magic and Wonder of Math and Sciences Adding & Subtracting by Sunya Publishing.  This has been a fun review, as my son loves multiplication, but is not a fan of subtraction.  So this has been a great way to do some sneaky school!

Here is what we received: 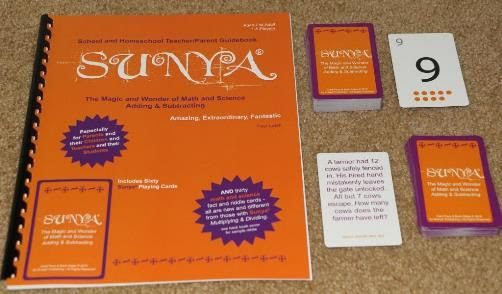 An instruction book, two decks of cards and a number line (not in photo).
The instruction books is a bit wordy.  I read it over twice, then decided to just jump into the game.  It is quite simple to play and it does make you think!  There are two decks of cards.  The first deck has 60 number cards (1-9) along with a card for the plus sign, another card for the minus sign, and another for the equal sign.  There is also two wild cards (as seen below). 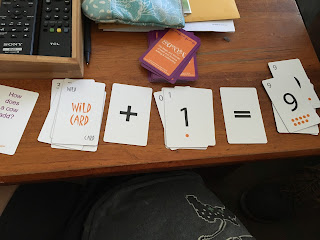 It is somewhat similar to uno, it has numbers instead of colours and you're working math problems.  The word Sunya (the "u" is pronounced "oo" as in "book") is a word from the ancient language in India, Sanskrit, and it means of being empty or without quality.  Like in uno, when you have one card left you say, "Uno!", in Sunya, you say, "Sunya!" when you are out of cards to show you are out of number cards and you have won!


The second deck has 30 amazing math and science facts and riddles.  My kids have especially enjoyed these.  What kid doesn't love a good joke?! 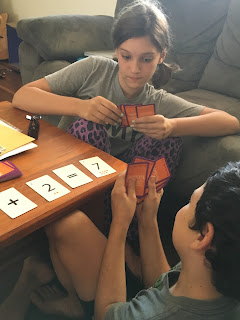 My kids were able to play this together, but what I also loved was that my son could play it by himself.   Sunya is a great game to strengthen your child's math skills and have fun at the same time.  Sunya also has a multiplying and dividing game that looks like fun.

Please check out Sunya, they are a new company and are not quite ready to receive orders.  So, this is a sneak peak for you.  Keep an eye on their website!