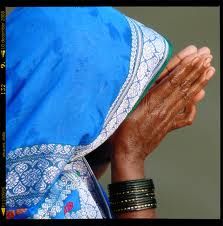 Have you ever been persecuted for your faith?  Do you know anyone who has faced persecution?  I have heard many people talk about having a "door slammed in their face", while on visitation, and being sworn at or having someone take a tract and throw it on the ground, and these instances being given as examples of persecution.  I don't consider any of these scenarios persecution.  These are examples of unsaved people being antagonistic toward the Gospel.

persecute:  to harass or punish in a manner designed to injure, grieve, or afflict; specifically: to cause to suffer because of belief

There is a believer in India who is heavy on our hearts right now.  Because of the situation, I am not giving many specifics or details.  We are just asking our friends and supporters to pray.

There is a person who has been attending one of our churches for a while.  This person is the only Christian in their strong Hindu family.  The family is violently opposed to Christianity.  Recently, this person decided, after much prayer and counsel, that they were ready to take a public stand for Christ.  This person had told us that when they returned to their home, they wanted to share the Gospel with their family, fully knowing that there would be consequences.  We learned today that there have been consequences.  The family confiscated the Bible and phone of this believer.  They won't allow this believer to contact any of their Christian friends, and are trying to force this person to marry a high caste Hindu.  Brian was able to talk to this person briefly on the phone.  This believer told him that they are living in a nightmare, with no escape in sight.  They are a prisoner in their own home, because they took a stand for Christ.

Please pray for this believer in Christ, who is suffering real persecution at the hands of their family members.  Our hearts are heavy as we are not able to contact or correspond with this person at this time. Please pray with us that God would send strength and deliverance.