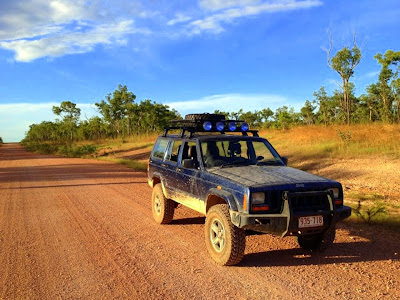 We live in the Northern Territory of Australia.  The locals call it "Territry".  I now say Territry as well.  Not because I want to be cool and fit it, but I guess I hear it that way so often, it just comes out that way!

We do get teased a bit for our accent.  You wouldn't believe how many people say they love my accent!  It makes me laugh every time, because Americans love the Australian accent.  Although when the Australians mimic our accent, it always comes out as a deep southern accent.  Sadly, Swamp People has made it over here.  :)

When we were first looking to move here, we were given the impression of a big city.  I laugh to even think that now!  Darwin is about the size of my hometown, I would guess.  It's about 5-6 blocks long, then you hit the ocean!

The Territory is quite far from the other cities (Cairns, Sydney, Melbourne, etc), which is probably why things are so expensive because it all has to be shipped here.  So, we're kind of all alone up here on the Top End.

There is plenty of "bush" filled with snakes and other wild creatures (like crocs, kangaroos, water buffalo, and more) for my husband to explore, plenty of "off-roading" for my Jeep to take part in (with my husband driving, of course!), and plenty of breath-taking scenery to behold!

Here is some info from Wikipedia...

/ˈdɑrwɨn/)[3] is the capital city of the Northern Territory, Australia. Situated on the Timor Sea, Darwin has a population of 127,500, making it by far the largest and most populated city in the sparsely populated Northern Territory, but the least populous of all Australia's capital cities. It is the smallest and most northerly of the Australian capital cities, and acts as the Top End's regional centre. Darwin has grown from a pioneer outpost and small port into one of Australia's most modern and multicultural cities.
Its proximity to Asia makes it an important Australian gateway to countries such as Indonesia and East Timor. The Stuart Highway begins in Darwin, ending at Port Augusta in South Australia. The city itself is built on a low bluff overlooking the harbour. Its suburbs spread out over some area, beginning at Lee Point in the north and stretching to Berrimah in the east—past Berrimah, the Stuart Highway goes on to Darwin's satellite city, Palmerston, and its suburbs. The region, like the rest of the Top End, has a tropical climate, with a wet and a dry season. The city is noted for its consistently warm to hot climate, all throughout the year. It receives heavy rainfall during the Wet, and is well known for its spectacular lightning.[4]
The original inhabitants of the greater Darwin area are the Larrakia people. On 9 September 1839, HMS Beagle sailed into Darwin harbour during its surveying of the area. John Clements Wickham named the region "Port Darwin" in honour of their former shipmate Charles Darwin, who had sailed with them on the ship's previous voyage which had ended in October 1836. The settlement there became the town of Palmerston in 1869, and was renamed Darwin in 1911.[5] Having been almost entirely rebuilt twice, once due to Japanese air raids during World War II, and again after being devastated by Cyclone Tracy in 1974, the city is one of Australia's most modern capitals.[6][7]


We are currently in the dry season.  We haven't seen rain for a few months.  I miss rain!  The weather has been perfect low 80s since the end of May.  So, if you want to come visit, now is the time!  When we got here last November we arrived during the build up, and it was hot and humid!  So I only expect this beautiful weather to last another month or so then it will start getting hot and humid and I will be indoors enjoying my air conditioner!

So there  you have some info on our surroundings here in the Top End.  Visitors are welcome any time!﻿
Posted by Be Thou Exalted at 11:45 AM

It seems rain is lacking across the globe. Mozambique needs it too along with the states. Enjoyed learning more of your town.