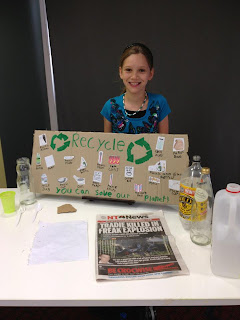 I love libraries, and our new local library is no exception.  In Australia they go to school from January through December, yep, year round!  Of course, with the year round school they have a few long breaks in between.

School ended around the middle of December and most kids go back to school on January 31. Autumn and Cody start on Monday.  During this holiday break our local library did a Science Program that was every Monday-Thursday in January from 10am-12pm.

Every day they had a little lesson on science.  One day they discussed space and planets, another day they studied anatomy, and on another day, animals (they even brought in a crocodile!).  They did a wonderful job, and Autumn loved it.

Today was the last day, and they held a science fair.  Autumn decided to do hers on recycling (which is very big here).  She did the entire project herself.  We were very proud of her.

When we got to the library this morning I was surprised to see kids have erupting volcanoes, a suspension bridge, plants, how craters on the moon happen, and more.  The mayor of our town was the judge.  He was very kind to the kids, but Autumn was nervous.  She's never participated in anything like this.

Although she didn't win the first, second, or third prize, every child took home a small prize.  I was pleased with how they judged and how complimentary they were to each child.

I hear they have another program in June, and I'm sure we'll be participating.  This was a lot of fun and a great way to get out and meet new people.﻿
Posted by Be Thou Exalted at 10:44 PM

WE love our library as well & they have wonderful programs in the holidays too! Your daughter did so well on her project! Great job!