Jessica at Life As Mom had a neat cake idea for Easter. So, I thought I would make the Pioneer Woman's Best Sheet Cake Ever and then decorate it like Jessica's. The one thing I love about the Pioneer Woman's website and cookbook is all the step-by-step pictures.
I've been married for almost 11 years and have been a mom for 7 years, you'd think I've have this cooking thing down, but I don't. My excuse is that we lived with my mother-in-law for 2 years and was on deputation for 2.5 years, and during that time I rarely cooked. This year I've made it a goal to learn to be a better cook. I've already tried a ton of new recipes. Some have been okay, some have been good, some have been great, and some have been, well, complete failures, as you soon will see.
Autumn loves to cook. I like her helping, I try to be patient, I try to be a good mom and let her stir, add measurements and such, I really do try. Look, here is proof... 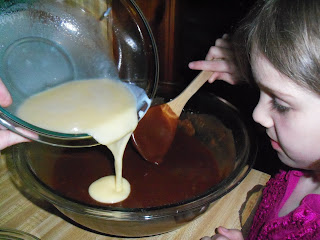 So, here is the beginning of The Best Chocolate Sheet Cake Ever and the end. 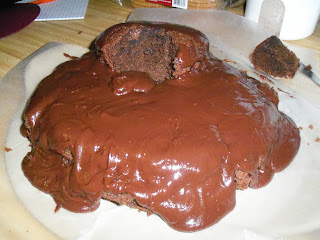 This is not The Pioneer Woman's fault, although it would be fun to blame her because she doesn't know me, and could care less if I blamed her (I would hope). Here's what happened...the cake is soooooo moist that it was meant to be cut in the pan and not taken out to be decorated with toys. 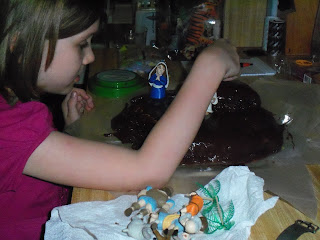 As soon as I flipped it onto the tray I was going to decorate it on the cake started to fall apart. We started putting the characters on it and well, look for yourself... 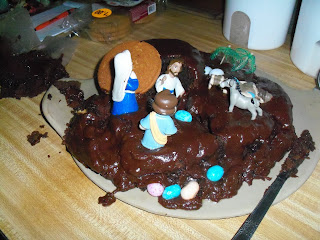 The worst part was taking out the wax paper from underneath, thanks Martha Stewart for that idea. I think another problems was that I was impatient and didn't wait for it to cool down.
BUT the cake was good. I made a box mix because I know they're a bit thicker and here is the final product... 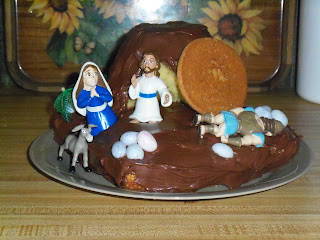 The one great thing about making this cake was reading out of the Bible the story of Jesus' resurrection. Autumn put the soldier (aka Goliath) face down, because the Bible say the soldier's fell as dead men. I know Jesus wasn't at the tomb, but we didn't have an angel and decided to put our Jesus figure there showing our risen Savior! He's no longer in the tomb, people, HE IS ALIVE! The one thing no other religion can say - "I serve a risen Savior"!!!!
Although the first cake was literally a flop, at least the second one turned out looking nice (except for the corner I just saw doesn't have icing!). We'll be taking this to our family's Easter dinner tomorrow.

Email ThisBlogThis!Share to TwitterShare to FacebookShare to Pinterest
Labels: Cooking/Baking