My son has been enjoying our review of Times Tales for The Trigger Memory Co.  He just started 3rd grade at the beginning of the year, and his regular math curriculum was starting to introduce multiplication, so I couldn't wait to get started with Times Tales.

We were given the digital download version which included two files with videos and three PDF files with printables (tests, crossword puzzles, flashcards, and a cube game).  We don't have the best internet and the first file with the video did take some time to download (like 12 hours), but a week later our internet went to NBN (Australian) and the second download only took about an hour.  There are some great homeschool programs out there and they can be quite expensive.  Even if the curriculum is great, we can't always afford it.  But this is a great program that is also affordable!

When doing the review, if my son got stuck on 7x8, I'd just remind him of the story, and he'd immediately remember.  It was fun watching his brain working.  We finished the videos about 2 weeks ago, and I just asked him what is 7x8 and he immediately said 56!  Thank you, The Trigger Memory Co., for making such an awesome product! 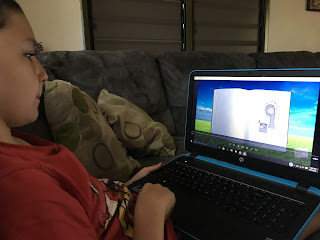 It is recommended that in the first week, you watch the first video and do the worksheets and flashcards.  The video has places to pause and not go any further until you've answered the problems correctly.  My son had to do this about three times, but then got the hang of it when he realised the purpose of the stories.  After they have completed the first week, give it a week or so to do the second video.  The videos were engaging and fun to watch, and I found my 13 year old watching as well.

I've been sharing Times Tales with all my homeschooling friends, and some of them have already purchased the program.  My son has loved the program, and has asked to watch the dvd's several times.  For just $19.95 (download version) you child can learn his upper times tales in no time at all!  We highly recommend Times Tales from The Trigger Memory Co. 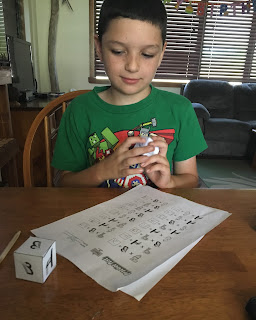 The cube game and one of the tests.

We love Times Tales, too! I am recommending it to anyone with kds learning their Multiplication Facts!

Do you think it would be any good to Australian families? :)

Be Thou Exalted said...

Absolutely! I've already had some Australian friends purchase it.